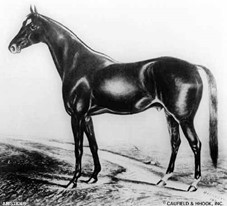 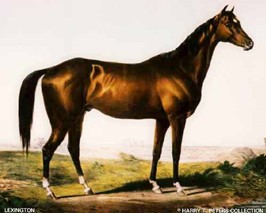 The estate built by John Tayloe II, in 1747, and later maintained by his son, John Tayloe III, was among the outstanding stud farms of colonial Virginia. The Tayloes owned and raced such important horses as Childers, who was imported in 1751 and proved to be a sire of great mares. Childers returned to racing after six seasons at stud. At the ripe old age of 13, he carried 180 pounds, and finished a five-mile race in 12 minutes 27 seconds to win 500 pounds. Another Mount Airy horse was Leviathan, who was the first champion gelding in American turf history, winning 23 consecutive races. In 1802, he conceded 70 pounds to an opponent, yet won a five-mile “dash.” The younger Tayloe bred his imported mare, Castrinira, to the great Diomed, and the resulting foal was Sir Archie, one of the greatest sires in American Thoroughbred history. The eminence of Mount Airy is evidenced by the fact that between 1791 and 1806, the farm’s 141 entries won 113 races – a fantastic record. 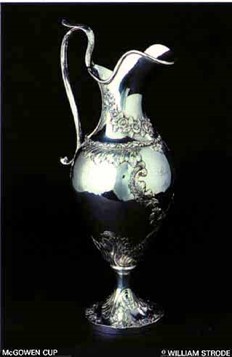 The pedigrees of American Thoroughbreds rarely can be traced before the Revolutionary War. The War haphazardly scattered horses throughout the country and their pedigrees were lost. The future of Thoroughbred blood in America was largely based upon imported stock. Among the most important horses imported after the Revolution was Diomed, foaled in 1777. He was the winner of the first Epson Derby in England in 1780. A great winner on the track, Diomed’s career at stud floundered. He was bought by an American, Colonel John Hoomes, in 1798, despite his reputation in England as “a bad foal-getter.” But John Tayloe III put a number of his mares to Diomed, and he liked the results. Diomed sired some of the most famous horses in American turf history. Among them was Haynie’s Maria, who never lost a race until she was a nine. Andrew Jackson declared that Haynie’s Maria “can beat any thing in God’s whole creation.”… Diomed also sired the undefeated Ball’s Florizel, Potomac, Duroc, and greatest of all, Sir Archie, who became a singularly important influence in American Thoroughbred history. His line extended to Timolean, Boston, and Lexington. When Diomed died at the age of 31, one historian reports, “…there was as much mourning over his demise as there was at the death of George Washington.” 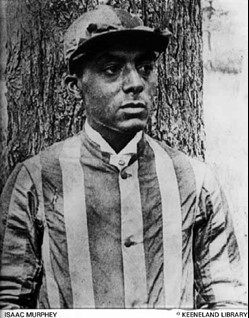 Described as the equine “hero of heroes,” one of the great native Thoroughbreds of America was Sir Archie. The horse was originally named Robert Burns, but John Tayloe, III changed his name to Sir Archie in honor of his friend who owned a half interest in the colt, Captain Archibald Randolph. William Ransom Johnson, “the Napoleon of the Turf,” once owned Sir Archie and described him as “the best horse I ever saw.” After no more challengers could be found, Sir Archie’s racing career ended and he went to stud. From 1810 to 1833, he sired such magnificent horses as Timolean, Sir Charles, Henry, and Lady Lightfoot. Sir Archie was also the great grandsire of Lexington. One authority claimed that Sir Archie “filled the hemisphere with his blood. 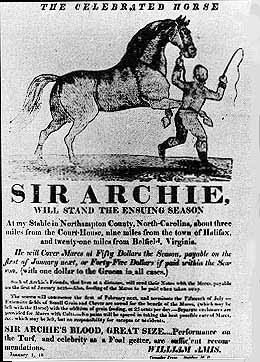