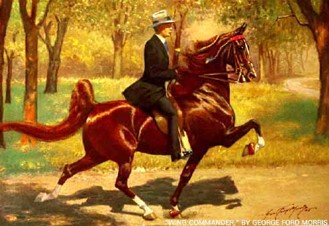 Wing Commander was trained and shown by Earl Teater, one of the outstanding trainer-riders in the Saddlebred world. In 1946, he was first entered in competition as a five-gaited stallion and began a career of consistent victories over the finest Saddlebred horses in the country. At the Kentucky State Fair in 1948, Wing Commander won the five-gaited World’s Grand Championship, and continued to win this championship every year until he was ten years old in 1953. Retired to stud at Castleton Farm, Wing Commander earned a reputation as a prepotent sire of champion Saddlebreds.